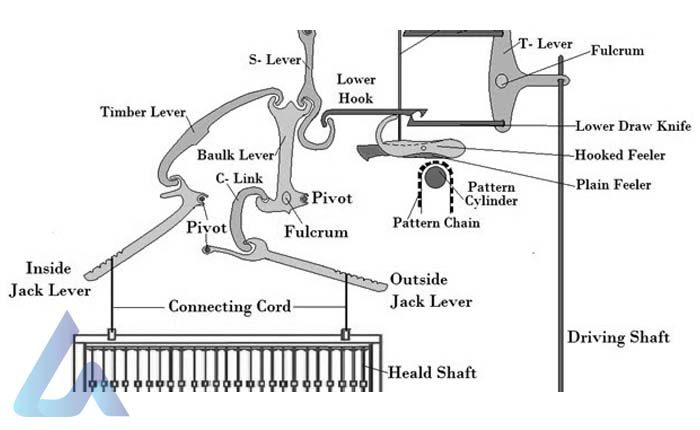 The dobby is a shedding device placed on the top of a loom in order to produce figure patterns by using a larger number of healds than the capacity of a tappet.

Dobby shedding is classified into below types:

Positive dobby shedding is the combination of 3 Cylinders, jack lever, spring and a shaft. Between the 3 cylinders, a shaft is a pin in one side the upper cylinder moves because the opposing clockwise and lower cylinder moves because of the clockwise direction. the main cylinder when getting motion from the shaft when it found peg or pattern plan then the cylinder connected to the higher half-toothed disc. so the heald frame is up, & when the pattern cylinder doesn’t found peg then the main cylinder connected to the lower half-toothed disc and also the spring retains the heald frame to the downward direction

When the connecting rod moves up and down and T-lever gives outward and inward movement. According to fabric design, when peg comes in contact with the feeder, then the right portion of feeler is raised and the left portion being lowered. Hooks are lowered as hooks are supported with feeler. When the left end of feeler is lowered then the upper hook came in contact with the upper knife. In this state, when connecting rod moves down, the upper portion of T-leavers gives outward movement. As a result, upper portion of S-lever, baulk lever also moves to the right side. Thus, a pull creates on timber lever and link.

As outside and inside jack lever joined with the timber lever and link, the lever moves up at the same time. Hence, the heald shaft rose up.

Hence, the heald shaft again rose. Thus, a heald shaft is alternatively rose by the lower knife and upper knife. The shaft will therefore be lowered with the help of return spring and will remain down for the next pick.

In the cotton industry, maximum 24 shafts dobbies are used. But mostly 16 to 20 shafts are used.

In worsted industry, dobbies with 36 jacks are in uses and many of them are positive in action and suitable for heavy shedding.

The chance of pattern in the fabric, in dobby loom, can be readily done where as it is laborious and expensive in case of tappet.

Dobbies offer better facilities for producing a variety of patterns with a greater number of healds than that is possible with tappets.

Dobbies are extensively used for weaving twill, sateen and other simple weaves.