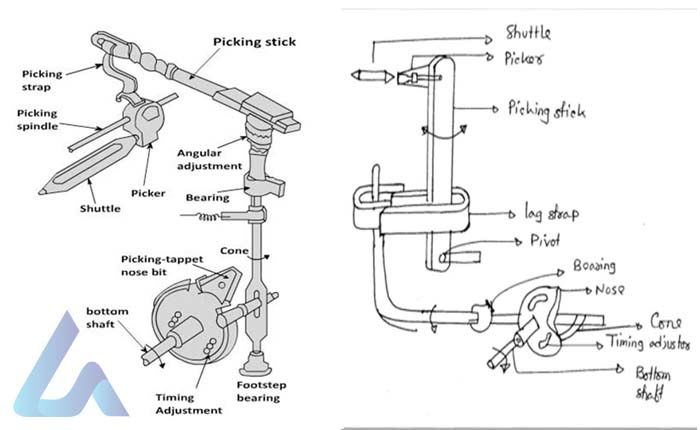 Pick is a single weft thread in a woven fabric. Picking is the second primary motion in weaving. The action of inserting weft yarn through the warp yarns is called picking. Picking motion propels the weft from one end of the loom to the other. It may be done by hand or by using devices like a shuttle, gripper, rapier, air jet, or water jet.  Picking may be carried out with or without a shuttle.

If the picking is done due to the picking arrangement being situated upon the shuttle box, then it is called over pick / over picking.

On the other hand, If the picking is done due to the picking arrangement being situated under the shuttle box, then it is called under pick /  under picking.

Features of Over Picking Mechanism:

Working principle of Over picking mechanism:

How to Increase PPM/picking per minute:

✔Picker arm is placed under the race board.

✔Used for heavy weight fabrics in silk and rayon looms.

Working principle of  under picking mechanism:

✔The tappet is driven by the bottom shaft. When the picking tappet strikes the picking

cone, it displaced and the side shaft is Turned.

by picking strap. The lower end of picking stick is pivoted. So that is pulled with the

pulling of side   Shaft.

through the warp shed. Picking is done.