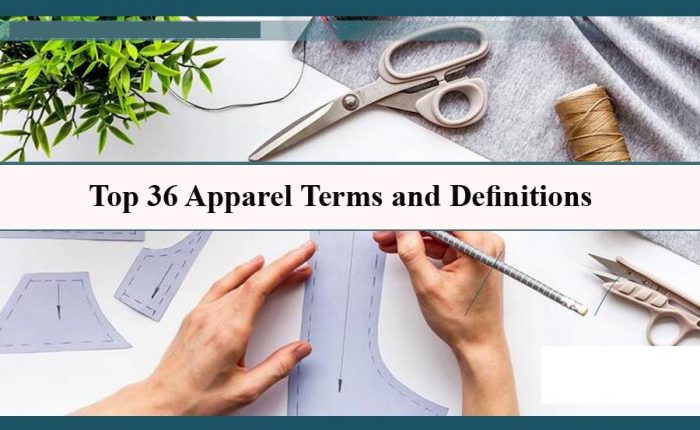 To have a clear cristal knowledge of Apparel Industry we need to know about some basic  Apparel terms and definitions.

Allowance: When a garment is made by adding extra dimension with the exact body measurement is called allowance.

Applique: A cut out design or shape attached to the face of a fabric for ornamentation of garments is called applique.

Basic Block: It is an individual component of garments without any design or style.

Basting: The process of non-permanent sewing for placing perfect place just before final sewing is called basting. It can be done by manually or by m/c.

C and F: If the price of goods is mentioned in invoice including transport cost is called C and F. (Cost and Freight).

I.F: If the price of goods is mentioned in invoice with including transports cost and insurance cost. (Cost, Insurance & Freight).

Collar: The flat, upright or turned over section of a garments which fits around the neck is called collar.

Cuff: The lower part of the sleeve of a garments and also the corresponding part of trouser and gloves is called cuff.

Dart: The process to give respected shape by removing the wedge from the garments surface by stitching or cutting and stitching is called dart. It is used for tightness of goods.

Drape: The ability of a fabric to hang graceful folds is called drape. Example : The sincisoidal type folds of a certain or skirt.

Dummy: The model which is exactly similar to the shape of the body of a man and which is used to check the fitting of garments is called dummy.

Flap: The part which is used to cover the opened face the pocket is called flap.

Fore Part: The front parts of the garments which are used for covering the upper part of the body is called fore part.

Grading: It is the process to make pattern of different sizes from master pattern.

Hang Appeal: The garments which are hanged on hangers or kept on hanger during selling, how much beautiful to see in that condition is called hanger appeal.

Hook and Loop Fastening: A Swiss invention made this product. This item consists of two nylon tapes, one having a surface of loops and the other surface of hooks. When pressed together, two tapes adhere and cannot open by side way turn but easily open by upwards turn.

Inset: The pieces of fabrics which are in fining or which is used to increase the beauty of cloth is called inset.

Interlining: Interlining is one kind of accessories which is used between two layers of fabric in garments to support, reinforce and control areas of garments and to remain actual shape. It is two types. Such as: (i) Non Fusible/Sewn Interlining (ii) Fusible Interlining

Invoice: The documents mentioning the price is called invoice. After sending the garments goods to the importer country it is to the buyer for collecting price.

Jigger: It is one kind of button which are used in the inner side of the garments.

L/C: A letter of  credit  (also  known  as  documentary  credit)  is  a  document issued by a bank on behalf of an applicant (the buyer) undertaking to make payment  to  the advising bank of beneficiary  (the  seller)  up  to  a  stated  amount  of money, within a prescribed time limit and against certain documents.

Ligne No: The measuring unit of the bottom which indicates the diameter of the button is called ligne no, If diameter increase then ligne no is increased.

Ligne: A standard measure equal to 0.635 mm by which buttons and ribbons measured is called ligne.

Lining: The cloths which are used to cover the part or all of the inside of apparel, the back of curtains or the inside or back of the other product is called lining.

It is generally a functional part of a garment, an accessories. Lining materials can be used for small parts pockets and for complete garments, either fully bagged out. It can be used coat, jacket and rain coat, body and sleeve for ladies items. Such as: Blouse, frock etc. It is attached by sewing, coating is not used.

Motif: The decorative figures of a pattern is called motif. These may be cut out and applied to a garment for ornamentation.

Pleat: The folds usually run in the lengthwise direction of a garments giving a decorative effects and allowance for expansion of the garments in the cross section is called pleat. It is used for looseness of garments. Dart and pleat are all used of fashion designer in the back Part of a shirt.

Pressing: The process to remove the unwanted crease and wrinkles from the fabric to give it smoothness, lusterness, and the appearance is called pressing. It is known as ironing in garments industries.

Seam Pucker: Unwanted waviness of the material along the seam line is called seam pucker. This may be apparent immediately after sewing or it may develop later in use.

Sewing: Sewing is the process to join up the different parts of the fabric with the help of sewing needle and threads in manually or by sewing machine.

Stitch: Loop or loops of one or more threads bound with each other, either by interlacing, interlooping, intralooping or combination of those when sewing fabric, each unit of such configuration is called stitch.