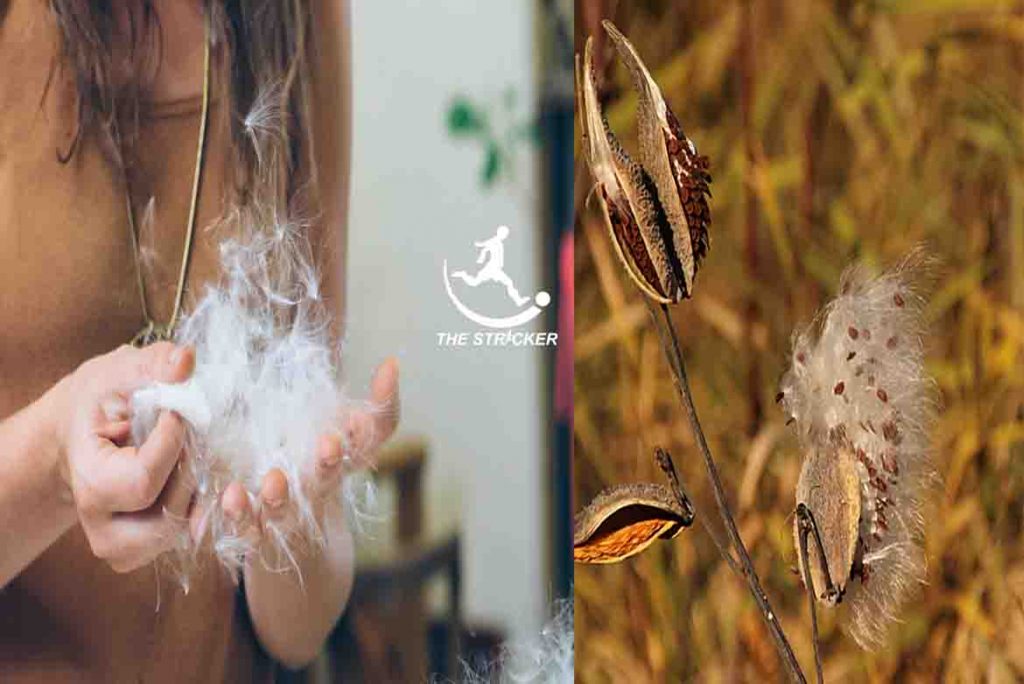 The milkweed plant produces a fiber that can be used by spinners. Milkweeds are a native perennial in North America. The seed pods produce a silky lightweight fuzz, called silk or floss. The lustrous, soft fibers are yellowish-white in color. Milkweed fibers are too brittle to spin and are used for upholstery padding. Let’s learn about Milkweed Fiber.

As aforementioned, cultivators handle the seedpods that people send to Monarch Watch from all over the country. Because seedpods are only ripe during summer and into fall, there is a narrow window of time in which people collected and sent their seeds.

The seeds are attached to the fluff so that they can blow away in the wind. Unfortunately, this meant a very time-consuming process to separate the two. This step involves dumping them both into the makeshift seed separator contraption (made from a garbage can) and giving it a few spins using the PVC pipe lever. The seeds fall to the bottom while the fluff floats around the top. Opening the lid afterward sent fluff flying everywhere, but this method was still faster than separating by hand.

Producers selected several different ratios of wool to milkweed fluff that they wanted to attempt to spin. This step meant weighing the fibers based on these ratios, which are discussed in the next section.

Once the correct ratios were measured, they needed to be carded, or blended together. This was the most time-consuming process, as Producers had to brush the two fibers over and over again until they all evenly lined up in the same direction.

When the fibers were all aligned, they were rolled into what is called a rollag— basically just a concentrated form of the blended fibers that one spins with.

After spinning two separate rolags on two separate bobbins, they made yarn by plying them together, which basically means winding one around the other.

Milkweed floss is used in such water-safety equipment as life jackets and belts and will float in water while supporting as much as 30 times its own weight. It is also used as upholstery padding and insulation material. Like similar seed they also have good buoyancy and were used as substitutes for Kapok in lifebuoys during World War II.

The sap and leaves of the plant are toxic to all mammals.