Coir or coconut fiber is a natural fiber extracted from the outer husk of the coconut.  It is the natural fiber of the coconut husk where it is a thick and coarse but durable fiber. In this article; we are going to know about Properties & Uses of Coir Fiber With Types & Manufacturing Process.

The coir fiber is relatively waterproof and is one of the few natural fibers resistant to damage by saltwater. Freshwater is used to processing brown coir, while seawater and freshwater are both used in the production of white coir.

coir is used in floor mats and doormats, brushes, mattresses, floor tiles, and sacking. A small amount is also made into twine.

Pads of curled brown coir fiber, made by needle-felting (a machine technique that mats the fibers together), are shaped and cut to fill mattresses and for use in erosion control on river banks and hillsides

White coir spun into yarn is used in the manufacture of rope and, thanks to its strong resistance to saltwater, in fishing nets.

Coconut coir from Mexico has been found to contain large numbers of colonies of the beneficial fungus Aspergillus terreus, which acts as a biological control against plant pathogenic fungi.

Coir is also used as a substrate to grow mushrooms. The coir is usually mixed with vermiculite and pasteurized with boiling water. After the coir/vermiculite mix has cooled to room temperature, it is placed in a larger container, usually a plastic box.

Due to its superior absorption capabilities when compared to products made of clay, silica, and diatomaceous earth-based absorbents, dry coconut coir pith is gaining popularity as an oil and fluid absorbent.

Coconut fiber (coir) is also using as a construction material because Fibres which are eco friendly, pollution-free and do not adversely impact on the environment and its constituents are called natural fibers 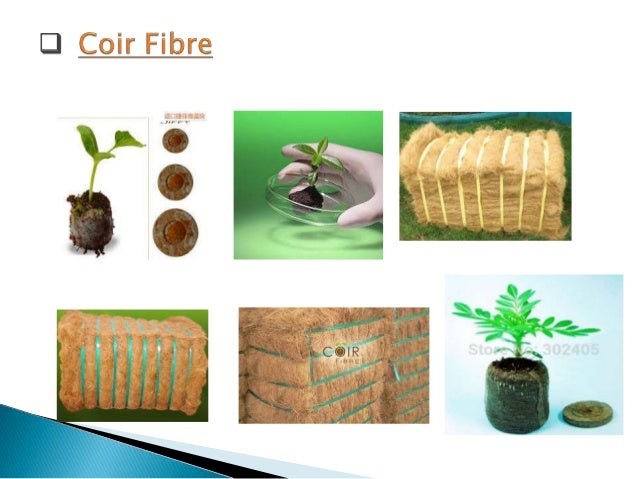 The fibrous husks are soaked in pits or in nets in a slow-moving body of water to swell and soften the fibers. The long bristle fibers are separated from the shorter mattress fibers underneath the skin of the nut, a process known as wet-milling.

The mattress fibers are sifted to remove dirt and other rubbish, dried in the sun and packed into bales. Some mattress fiber is allowed to retain more moisture so it retains its elasticity for twisted fiber production.

The coir fiber is elastic enough to twist without breaking and it holds a curl as though permanently waved. Twisting is done by simply making a rope of the hank of fiber and twisting it using a machine or by hand.

The longer bristle fiber is washed in clean water and then dried before being tied into bundles or hanks. It may then be cleaned and ‘hackled’ by steel combs to straighten the fibers and remove any shorter fiber pieces.

Coir bristle fiber can also be bleached and dyed to obtain hanks of different colors.

The immature husks are suspended in a river or water-filled pit for up to ten months. During this time, micro-organisms break down the plant tissues surrounding the fibers to loosen them — a process is known as retting.

The Segments of the husk are then beaten with iron rods to separate out the long fibers which are subsequently dried and cleaned. Cleaned fiber is ready for spinning into yarn using a simple one-handed system or a spinning wheel.

Researchers at CSIR’s National Institute for Interdisciplinary Science and Technology in Thiruvananthapuram have developed a biological process for the extraction of coir fiber from coconut husk without polluting the environment.

The technology uses enzymes to separate the fibers by converting and solubilizing plant compounds to curb the pollution of waters caused by the retting of husks.

Bristle coir is the longest variety of coir fiber. It is manufactured from retted coconut husks through a process called defibering.

The coir fiber thus extracted is then combed using steel combs to make the fiber clean and to remove short fibers.

Bristle coir fiber is used as bristles in brushes for domestic and industrial applications.

Retting is a curing process during which the husks are kept in an environment that encourages the action of naturally occurring microbes. This action partially decomposes the husk’s pulp, allowing it to be separated into coir fibers and a residue called coir pith. Freshwater retting is used for fully ripe coconut husks, and saltwater retting is used for green husks.

For freshwater retting, ripe husks are buried in pits dug along riverbanks, immersed in water-filled concrete tanks, or suspended by nets in a river and weighted to keep them submerged. The husks typically soak at least six months. Retting is a curing process during which the husks are kept in an environment that encourages the action of naturally occurring microbes. This action partially decomposes the husk’s pulp, allowing it to be separated into coir fibers and a residue called coir pith. Freshwater retting is used for fully ripe coconut husks, and saltwater retting is used for green husks.

After retting, the husks are taken out of the water and washed. Outer skin peeled off, placed on wooden blocks, and beaten with a wooden mallet for separating the fibers from the pith. After fibers are separated from the pith, these are cleaned and then spread on shade for drying. The fibers spread for drying are occasionally beaten and tossed up with poles to remove the remnants of pith and impurities still adhering to the fiber.

The spinning of coir yarn is mainly a cottage industry in India and abroad. It is produced either by wheel spinning or hand spinning or mechanized spinning. Handspun yarn is soft and the twist and thickness are even. Wheel spun yarn has a hard twist; it is stronger and more uniform in size and twist than handspun yarn. The classification of coir yarn is based on variations of color, twist, pitch, storage, etc. and also an area of production like; Anjengo, Anatomy, Alapat, Beach, Rope yarn, Parur, Support, etc.

Coir yarn is treated with a dilute solution of sulphuric acid, which improves its color and gives a certain amount of brightness for the production of mats, Coir mats, fiber mats, especially mats, Mattings, Rugs, mourzouks, carpets, etc.

The Future of Coconut Fiber

As improved technology increases production, industry groups and governmental agencies are actively promoting new uses for coir fiber. Geotextiles are one promising area. The Indian state of Kerala designated 2000 as Coir Geotextiles Year, which is observed by increasing marketing efforts and supporting research to improve production. The annual world demand for geotextiles is 1.2 billion square yards (1 billion square meters) and growing. Although natural fibers account for only 5% of that, the proportion is expected to increase as more users turn away from non-biodegradable synthetics.

Another new product under development is an alternative to plywood that is made by impregnating a coir mat with phenol-formaldehyde resin and curing it under heat and pressure.