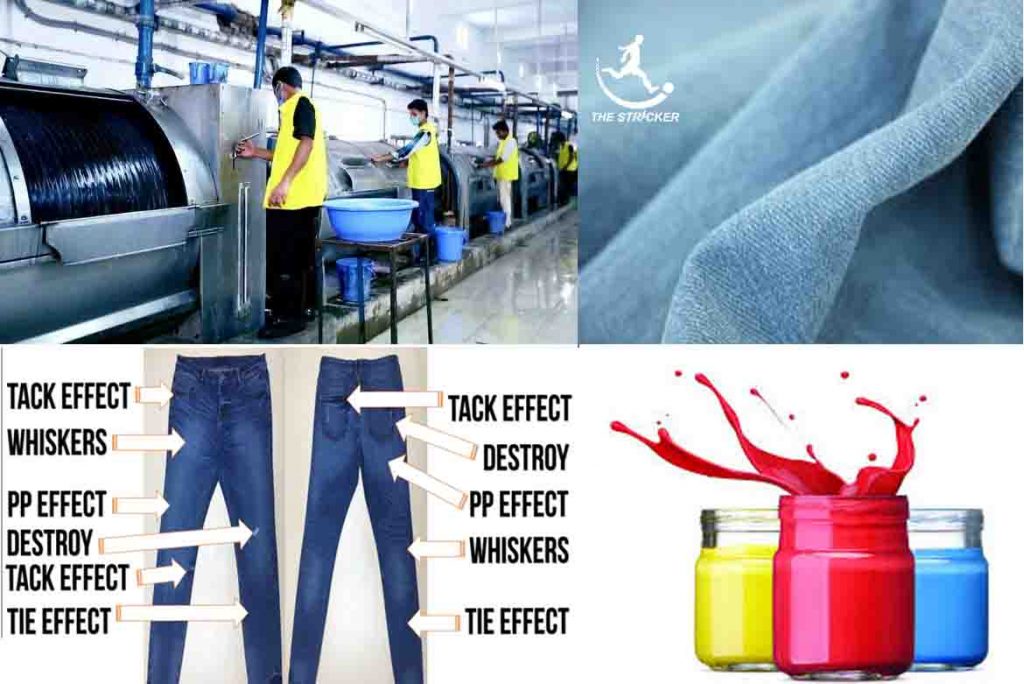 Tinting of Garments | Process of Tinting |

After the denim pant is being faded, the pants have dyed with very light color(.001% or .002%yellow or pink). This dyeing process is called Tinting/Overdyeing. This process is applied only to garments, not in fabric or yarn. We will discuss Tinting in Garments Industry

In color theory, a tint is a mixture of a color with white, which reduces darkness, while a shade is a mixture with black, which increases darkness. Both processes affect the resulting color mixture’s relative saturation. A tone is produced either by mixing a color with grey or by both tinting and shading.

Coloration that produces a very pale shade. A tint usually represents the minimum amount of color that will give a perceptible appearance of coloration. In yarn processing, fugitive tints are used for identification and then removed in wet processing.

Tinting (also called over-dyeing) Laundries often tint denim to try to make it look more vintage or to achieve a different cast. The telltale signs of a pair of jeans that have been tinted are that the pocket lining and labels are dyed as well as the jeans.

Tinting of denim garments is usually done after the stonewash process.

Purposes of tinting in denim:

A very small amount of dye is used in tinting. The process changes the hue/cast/tone of indigo. As soon as the tinting color covers up the indigo, it reaches the level of dyeing. Tinting gives garments a used/vintage and muddy look.

This process takes from 5 to 15 min and for better results, it is followed by dye fixing and clean up of the superficial dye. Dyeing is done on very light shades of indigo, grey denim, and ready for dyeing denim.

Tinting is a process where very less amount of tint is involved & mainly direct dye is being used to do this process. This is being done to change the hue/cast/tone of indigo. As soon as the quantity of tint color increases & it cover-up indigo reaches the level of dyeing. It is used to give garments a used / vintage & muddy look. This process takes from 5 minutes to 15 minutes time for better results followed by dye-fixing & clean up of superficial dye.

Dyeing is being done on a very light shade of Indigo, Ecru/ grey denim & Ready for dyeing denim. There are various types of dye.

The comparison of these dyes is given in the chart here below:

Tint Denim Garments Without Changing the Tone of Indigo:

It is achieved by the application of the direct/reactive dyes. In the case of direct dyes, the second application would be that of a dye-fixing agent for an adequate fastness. In the case of reactive, the fixing chemical goes along with the dyestuff. After the application, the treated garment is dried in the air or in a tumble drier for adequate fastness. If tinting were done by the immersion method, the tint would be all over. However, if a localized area is a target, a spray method is used. In either case, the tinting, as the term signifies, is done very lightly to achieve a particular cast, either overall or localized. If indigo does not change tone would look like a print with a sharp boundary. When tone changes fad gradient, the effect looks more aesthetically appealing and is considered desirable. The tone-change should be gradual and not abruptive.

The standard route to blasting/discharging/tinting is quite elaborate, in the light of three effects to be imparted on the same garment. There have been short cuts, which may be right/wrong/ingenious. If it is done on blasted/discharged areas, it obviously remains a spray method. However, if the tinting is overall, it follows the dyeing route. The process starts on gray garment being hand blasted followed by desizing and biopolishing. After drying the garment, tint-spray is given followed by air/machine drying and finishing.

For tinting by dyeing method, the bio polished garment can straight away go for tinting wet-on-wet followed by finishing and drying. In the case of white discharge tinting, the route would start with desizing-biopolishing on gray garment, peroxide bleaching after biopolishing being optional. After drying the garment; a potassium permanganate spray is given to areas where white discharge is aimed at. After air-drying for about 10-15 minutes; a neutralization step consisting of provide-acetic acid is given which is followed by hot and cold rinses. In the case of spray tinting, the garment will have to be dried first; whereas for overall tinting, dyeing the method could be followed wet-on-wet. Finally, finishing and drying would complete the process.

Tinting is a new trend in denim products. It is a new fashion. This fashion is now very popular in general. So measures should be taken & more research work should be done to make it better in the future.
References:

You May Also read :