The Consol Solar Jar is a mason jar that houses solar panels on the lid. Keep the jar out in the sun and it absorbs solar energy throughout the day. Come sunset, the jar lights up from the inside, becoming a functional lamp that is also beautiful!

The beauty of the Consol extends to the fact that it is handmade using local materials, by native South Africans. The Consol provides steady jobs to this community while instilling in them a sense of design, as they build these beautifully desirable lamps!

The Jar, being empty, is customizable, allowing you to decorate it on the inside with anything from shells, to postcards, to potpourri, making it not just a luminary, but a decorative element in your home too! Plus, guess what. It’s completely portable! So take your ornamental lamp wherever you go! 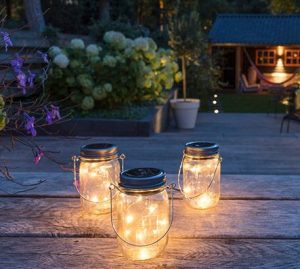 A solar-powered lamp captured Stefan Neubig’s imagination. Now he sells it around the world.

Stefan Neubig’s South African vacation switched from fun to life-changing when he arrived at a barbecue party. “It was already dark, and there were these glowing glass jars on the tables,” he says. The jars weren’t battery-powered or plugged into an outlet, and they weren’t burning gas. Instead, a solar cell in each jar’s lid provided power for four LED lights. Stefan says he “couldn’t concentrate on anything else. I was fascinated by the combination of simplicity and ingenuity.”

That same night, Stefan went online and learned that Harald Schulz, an engineer in South Africa, invented the lamps called The Consol Solar Jar that illuminated the barbecue party. “I sent him an email,” Stefan says. “A few days later I was sitting on a plane from Cape Town to Johannesburg with a business partner.” In Johannesburg, Harald guided Stefan through his factory, which employed people from the impoverished townships nearby and turned out products that brought light to a place plagued by power cuts.

I was so enthusiastic about the product and the social project behind it that I thought to myself: I have to make this idea famous outside of Africa.

Stefan says, “I was so enthusiastic about the product and the social project behind it that I thought to myself: I have to make this idea famous outside of Africa.” He flew back home to Germany with a few Solar Jars in his luggage, and he soon launched a website, produced marketing materials, and set up a storefront on amazon.de. “It began with a few sales per day, and slowly grew from there,” he says. “But when you have a great product, it starts to spread by word-of-mouth.”

When the time came to offer Solar Jars to customers outside of Germany, Stefan discovered Global selling, which offers tools and support to cut down on the complexity, cost, and effort of doing business internationally. He especially liked that he’d be able to rely on Fulfillment by Amazon to store his inventory, process customer orders, and ship Solar Jars for him, in addition to handling customer service and returns. “FBA made it very simple for us, and we started selling exclusively on Amazon.com in the U.S.,” he says.

Amazon.com customers have responded warmly, posting 382 reviews with an average rating of 4.7 stars. In one five-star review, an Amazon customer called the Solar “by far my fave item in the house. I never knew these existed but I’m glad they do.” Another wrote, “I use mine to provide free light through the house in the evening, then as a bedside lamp and handheld lantern for any dark forays through the house…. My only regret is that I only bought two. More will be coming in the future, I’m sure.” Stefan says, “There’s no better satisfaction than reading how a person from the other side of the world makes use of the Solar Jar and how delighted they are about this invention.”