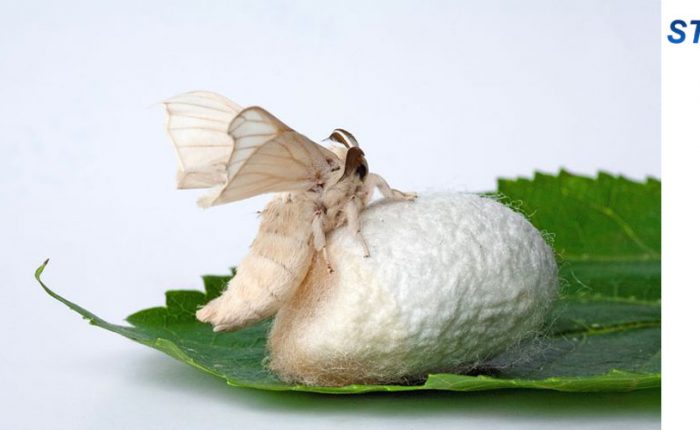 Production of Silk Fibre- is different from that of other natural fibers. There are many steps involved in silk manufacturing.

Sericulture has a long and colorful history unknown to most people. For centuries the West knew very little about silk and the people who made it. Pliny, the Roman historian, wrote in his Natural History in 70 BC “Silk was obtained by removing the down from the leaves with the help of water…”. For more than two thousand years the Chinese kept the secret of silk altogether to themselves. It was the most zealously guarded secret in history.

Silk is a fine translucent fiber produced from the silk worm. The manufacturing process of silk starts with the rearing of cocoons .There are many varieties of the silk worm from which the silk fiber can be obtained. However, it is found that the fiber obtained from the larva of Bombyx mori is of commercial value. The process of obtaining silk fiber from Bombyx mori requires careful nourishment of the cocoons which is put throught hes pinning process.

The process of cultivating the silkworm for the production of raw silk is called assericulture. Silk fiber is a continuous filament fiber consisting of the fibroin, which is connected together with the silkgum, sericin. This natural protein or fibroin is secreted from two salivary glands. (You are reading production of silk fibre)

Life cycle of the moth

They may be hatched three times a year .The female moth lays around 350 to 400 eggs and the moths die soon after. As they are subject to hereditary infection, the eggs from infected moths are destroyed which results in to production of fine silk. Larvae of about 3 mm are hatched from the eggs. For about 20 to 30 days, they are carefully nurtured and are fed five times a day on chopped mulberry leaves. Ideal temperature 23c-27c, humidity is 65%-80%.The silkmoth lays eggs,

The silk-moths cannot fly because their bodies are too heavy in relation to their wings. Male’s silk-moths die soon after mating while one single female silk-moth lies from 300 to 500 tiny eggs before she dies. The eggs hatch into the silkworms in spring time and the complete cycle takes approximately about two months.(You are reading production of silk fibre)

After 1 ½ hours. Because need three ejaculations.

If left undisturbed, the pupae inside the cocoon develop into a moth within two weeks. To emerge, the moth breaks open the cocoon by secreting an alkaline liquid that dissolves the filament.

After the first selection of cocoons:

The technological process of silk reeling.

SILKWORM AND THE FAMILY

There are many indigenous varieties of wild silk moths found in a number of different countries. The key to understanding the great mystery and magic of silk, and China’s domination of its production and promotion, lies with one species: the blind, flightless moth, Bombyx mori.

It lays 500 or more eggs in four to six days and dies soon after. The eggs are like pinpoints – one hundred of them weigh only one gram. From one ounce of eggs come about 30,000 worms which eat a ton of mulberry leaves and produce twelve pounds of raw silk. The original wild ancestor of this cultivated species is believed to be Bombyx mandarina Moore, a silk moth living on the white mulberry tree and unique to China.

The silkworm of this particular moth produces a thread whose filament is smoother, finer and rounder than that of other silk moths. Over thousands of years, during which the Chinese practiced sericulture utilizing all the different types of silk moths known to them, Bombyx mori evolved into the specialized silk producer it is today; a moth which has lost its power to fly, only capable of mating and producing eggs for the next generation of silk producers. (You are reading production of silk fibre)

THE SECRET OF SERICULTURE

Literary sources such as The Book of History, and The Book of Rites give further information about sericulture. Reeling silk and spinning were always considered household duties for women, while weaving and embroidery were carried out in workshops as well as the home. In every silk-producing province the daughters, mothers and grandmothers of every family devoted a large part of the day for six months in a year to the feeding, tending and supervision of silkworms and to the unraveling, spinning, weaving, dyeing and embroidering of silk.
By the fifth century BC, at least six Chinese provinces were producing silk. Each spring, the empress herself inaugurated the silk-raising season, for silk production was the work of women all over China.  Anyone who revealed the secrets or smuggled the silkworm eggs or cocoons outside of China would be punished by death.
(You are reading production of silk fibre)
Author :
Asif Hossain