Linen is a textile made from the fibers of the flax plant. Flax fiber is also known as Linen Fiber. In this article; we are going to learn about Flax Fiber Properties and Uses With Manufacturing Process and Types

Linen is comfortable, good strength, twice as strong as cotton, hand-washable or dry-cleanable, crisp hand tailors, well absorbent dyes and prints, well lightweight to heavyweight, no static or pilling problems, fair abrasion-resistant, etc. Basically there are two types of properties of linen fibers. One is physical properties and another is chemical properties.

(Linen Fiber Properties and Uses With Manufacturing Process and Types)

Historically, linen was one of the world’s most popular textile products. From Ancient Egypt to Renaissance Ireland, many cultures used linen as their predominant source of apparel and homeware fiber.

These days, linen is used for many of the same purposes that it was used historically, but this fiber makes up a drastically smaller percentage of the global textile market. Additionally, many of the original applications of linen, such as shirts and pants, have largely been replaced with cotton.

In hot climates, however, linen is still used to produce everyday clothing in large quantities. People living in near-equatorial regions can benefit from linen’s high moisture-wicking but low moisture-retaining profile and the natural white color of this fabric inherently reflects heat-inducing solar rays. 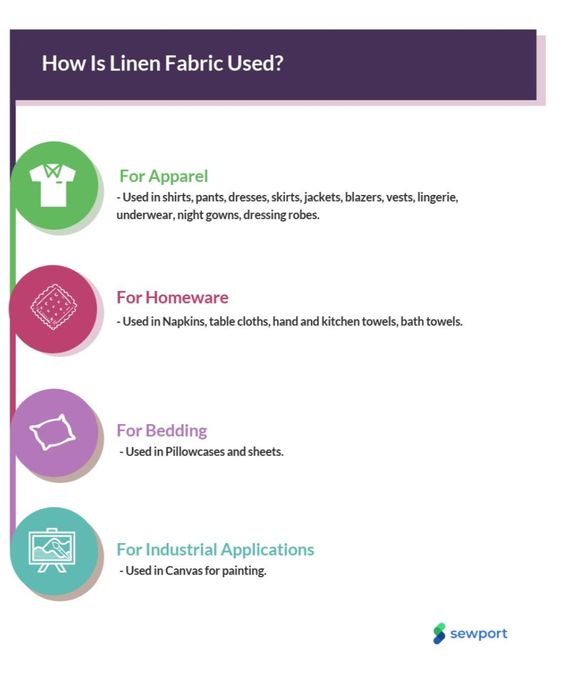 Manufacturers can use linen to make practically anything commonly made from cotton or wool. For instance, this fabric can be used to make shirts, pants, dresses, skirts, jackets, blazers, vests, and a wide variety of other casual and formal wear. Additionally, linen is still a popular material for lingerie and underwear, and it’s also commonly used in nightgowns and dressing robes.

Outside the realm of apparel, linen remains popular as a homeware material. It’s especially common to find napkins and tablecloths made from linen, and while cotton is more popular for towels these days, it’s also possible to find hand towels, kitchen towels, and bath towels made from linen.

Bedding is another arena in which cotton has all-but supplanted linen, but it’s still possible to find linen pillowcases and sheets. One advantage of linen in bedding is this textile’s durability; it’s possible to achieve higher thread counts in linen than in cotton without encountering durability issues. One of the lone industrial applications of linen is in the production of canvases for painting.

(Linen Fiber Properties and Uses With Manufacturing Process and Types)

The constituent material for linen fabric is the cellulose fiber found in the stems of linen plants. Like the stalks of many similar plants, linen stalks consist of a woody, reedy interior section and a fibrous, stringy exterior section.

To prepare for linen production, manufacturers of this fiber start by separating flax fibers from the woody interior of flax stems. Traditionally, this step has been accomplished by soaking raw flax stalks, but these days, manufacturers may use chemicals to achieve the same effect. Before flax fibers are spun into yarn, these chemicals are washed away, but residual toxic substances may remain on chemically-separated flax fiber. 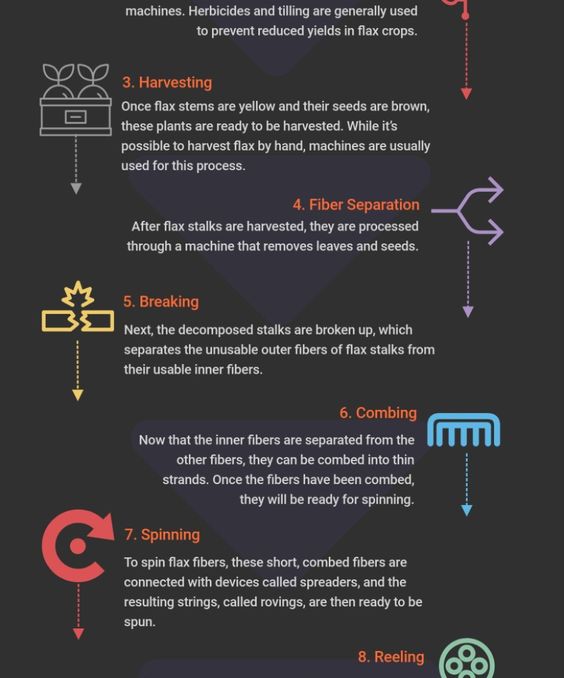 Flax plants are ready for harvesting after about 100 days of growth. Since flax plants do not tolerate heat, they must be planted in the cooler part of the year to avoid crop death.

These days, flax seeds are usually sown with machines. Since flax plants don’t effectively prevent the incursion of weeds, herbicides and tilling are generally used to prevent reduced yields in flax crops.

Once flax stems are yellow and their seeds are brown, these plants are ready to be harvested. While it’s possible to harvest flax by hand, machines are usually used for this process.

After flax stalks are harvested, they are processed through a machine that removes leaves and seeds. Then, manufacturers separate flax’s fibrous outer stalk from its soft, woody interior. This process is called retting, and unless it is expertly accomplished, the delicate flax fibers used for textile production could be damaged.

Now that the inner fibers are separated from the other fibers, they can be combed into thin strands. Once the fibers have been combed, they will be ready for spinning.

The spinning of flax yarn used to be accomplished with a foot-powered flax wheel, but these days, flax producers use industrial machines for this process. To spin flax fibers, these short, combed fibers are connected with devices called spreaders, and the resulting strings, called rovings, are then ready to be spun.

After being spun on a spinning frame, the resulting yarn is reeled onto a bobbin. To ensure that flax yarn won’t fall apart; it’s necessary to perform this reeling process in wet; humid conditions and the spun yarn is run through a hot water bath to further ensure yarn cohesion.

Finally, flax manufacturers dry the finished yarn and reel it onto bobbins. The yarn is then ready to be dyed, treated; and made into apparel, homewares, or other types of textile products. 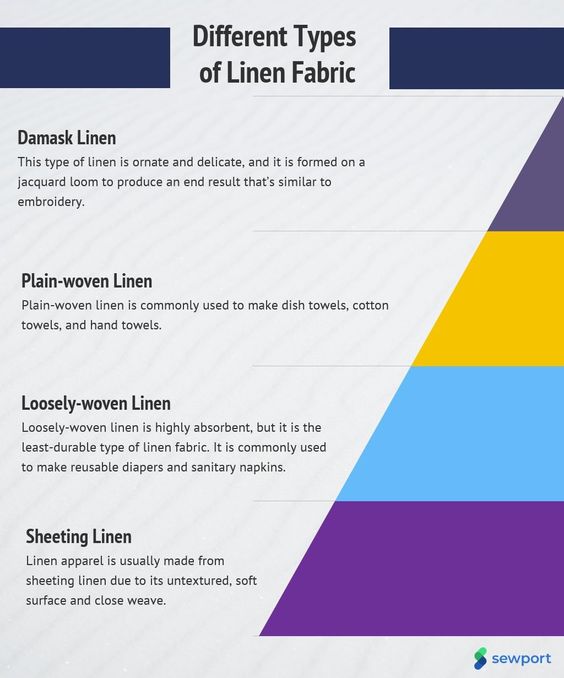 This type of linen is ornate and delicate; and it is formed on a jacquard loom to produce an end result that’s similar to embroidery. Damask linen isn’t designed for everyday use; and it’s more common in decorative items.

Plain-woven linen is commonly used to make dish towels, cotton towels, and hand towels. Since it is relatively loosely-woven; it is highly durable, but it doesn’t suffer from a significant decrease in durability.

Loosely-woven linen is highly absorbent, but it is the least durable type of linen fabric. It is commonly used to make reusable diapers and sanitary napkins.

Linen apparel is usually made from sheeting linen due to its untextured; soft surface, and close weave. This type of linen usually has a higher thread count than other forms of the linen fabric.

The main environmental concern regarding linen production is the release of chemicals used in the retting process into surrounding ecosystems. Most commonly; alkali or oxalic acid are used to separate flax fibers from the woody interior of flax stems; and while chemical retting of flax is undeniably faster and more efficient; both alkali and oxalic acid are toxic in relatively low concentrations.

Therefore, water retting of flax stems is preferred for environmental reasons; and to be certified as organic; it’s generally necessary for flax fiber to be water-retted. Since flax is already such an expensive fiber; however, water retting simply compounds on this increased cost to make organic flax less accessible to most consumers.