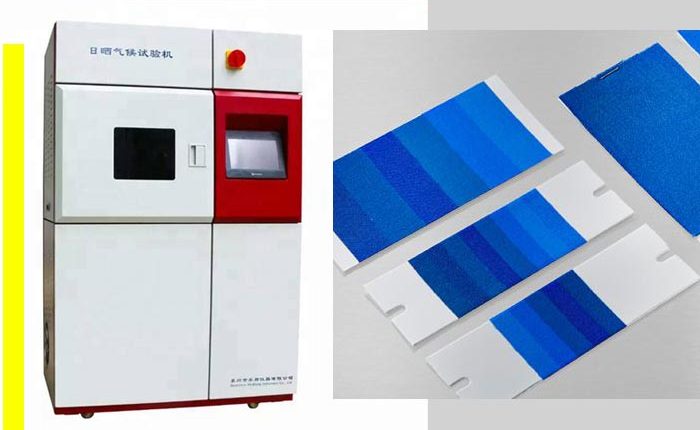 Color fastness to light refers to a dyed fabric’s ability to resist fading when exposed to light. Light fastness is evaluated by Blue Scales.

The resistance to sunlight depends on the following:

Samples are placed in a glass cabinet and exposed to sunlight for a certain time which is about 24 hours to 72 hours according to the buyer’s demand, and then evaluation is done by Blue Scales.

These machines have either a carbon-arc lamp or xenon-arc lamp as the light source.

For testing light fastness, samples are exposed to an intense artificial light generated by a Xenon arc lamp.

The light passes through a series of filters to ensure that its spectrum (wavelength) closely matches the spectrum of natural daylight coming through the glass. The humidity and temperature of the test atmosphere are controlled.

A small sample of material, together with a series of eight blue wool standard fabrics (reference 1–8), are simultaneously exposed to high-intensity light.

The lightfastness rating system is based on the rate of fading of eight blue-dyed wool samples (blue chips) which are rated from 1 poor to 8 excellent.

In general, textile materials colored with reactive dyes have very good light-fastness, the light-fastness rating being about six.

Textile materials colored with reactive dyes have good wash-fastness; their wash-fastness rating is about four to five. This is attributed to the very stable covalent bond that exists between the dye molecule and the cellulosic fiber.

Disperse dyes are nonionic dyes. So they are free from the ionizing group. These dyes have fair to good light fastness with a rating of about 4-5. Of all dyestuffs disperse dyes are of the smallest molecular size.

How to Improve the Color Fastness to Light?

Through research and practice, it is found that: Selecting the dye with good light fastness is the key to improving the colorfastness to light of textiles.

Select the Dye According to Fiber Properties and Textile Uses

Select the Dyes According to the Color Depth

For example, when dyeing light-color varieties, we should select the dye with stable lightfastness.

The fading properties of different dyes are different, and even the principle of photo fading is different. Sometimes, the presence of one dye sensitizes the fading of another dye.

When the color is a combination, we should choose dyes that will not sensitize each other, or even improve the light stability, which is particularly important when dyeing dark varieties such as black.