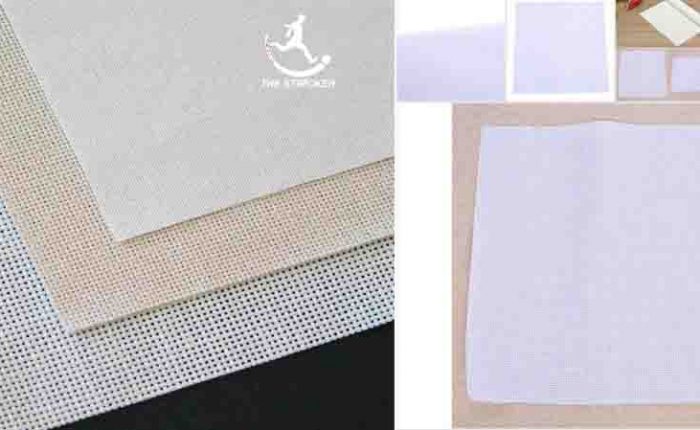 Aida Cloth Fabric is also known as Java Canvas Fabric. Aida is a cotton fabric, which has an original mesh used primarily for cross-stitch embroideries. It is an even weave cloth that makes it easier for crafters to do a special embroidery without any hoop.
Aida cloth is manufactured with various size spaces or holes between the warp and weft to accommodate different thicknesses of yarn. These are described by the count. For example, a 10-count Aida cloth would have 10 squares per linear inch. Typical sizes are 7, 10, 11, 12, 14, 16, 18, 22, and 28 counts, ranked from the coarsest to the finest count. Traditional colors are white and ecru though black, grey, shades of tan and brown, and other brighter colors are also available. Aida cloth is sold in precut sheets or in bolts of 40″ – 60″ width at most craft stores.
Aida cloth has a tendency to fray and often needs hemming before use. It should never be laundered prior to craftwork and tends to contract when the finished item is washed in soap and water. Hand washing improves the appearance of finished cross-stitching because Aida cloth naturally contracts in specific areas where it is embroidered.

Like all other fabrics, Aida Fabric is distinct in an incredible way. This fabric revolutionized the textile industry and continues to be the designer’s favorite. The most prominent characteristics of Aida Fabric are:

The wide, open, and even weaves present in Aida Fabric make it easier for novice stitchers to practice embroidery and master it. You, too, can quickly stitch your favorite design without it being a challenge. The holes are easily visible for fine cross-stitching.

Aida Fabric is available with different fabric counts. This means that you can customize the number of holes per inch in the fabric for your suitability. This makes it ideal for stitching beginners and embroidery amateurs.

Cotton garments are easy to handle, as they are easily washed and can fight tough stains. It is pure cotton; it does get attacked by moths and mildews. However, the material is well suited for embroideries and is not synthetic at all. This makes it biodegradable and eco-friendly.

As Aida Fabric is 100% cotton, it can be easily dyed in a variety of colors, and you can pair it with your favorite garment easily. The threads retain the colors for a longer time and prevent it from fading, unlike other fabrics.

Though Aida Fabric is primarily used for clothing purposes, it is aesthetically so pleasing that its limited applications are trendy.

Aida Fabric mainly facilitates embroidery and cross-stitching. People use them to make crafts and fancy clothes. It is used to create an artistic design on rugs, curtains, pillow covers, and bedcovers. Aida Cloth Fabric is also used as a canvas to make artistic designs and give a traditional and vintage look.
It is increasingly popular among the sewing and crafts groups as they use this fabric to showcase cross-stitch embroidery and handmade knitting. Embroidered patches are made on it and then sewn on dresses to make them look sophisticated.

You wouldn’t want to damage or ruin a beautiful Aida embroidery patch or cloth just because you didn’t focus on its maintenance. This delicate, even weave fabric requires care and attention.  It is no rocket science, and it doesn’t demand any special instruments.
Make sure you remove any dust and wash it with cold or mild water. Use neutral soaps and wash them thoroughly. You can iron it, but be careful while doing it. It would help if you also hemmed it before use. This fabric is durable and resistant to many things. You wouldn’t have to worry too much about it!

The term Aida was tossed in the late 19th century for an even weave cloth that was widely used. It was invented by Zweigart company located in Germany. It was prevalent in Britain, and this fabric was exported on a large scale to other countries because of its distinct material and ease in embroidery.
This fabric and its garments became vastly famous throughout Europe, and elite designers would use it to master cross-stitch and create ethereal dresses to showcase. Even a company used the name Aida to garner fame and popularity in the textile market.